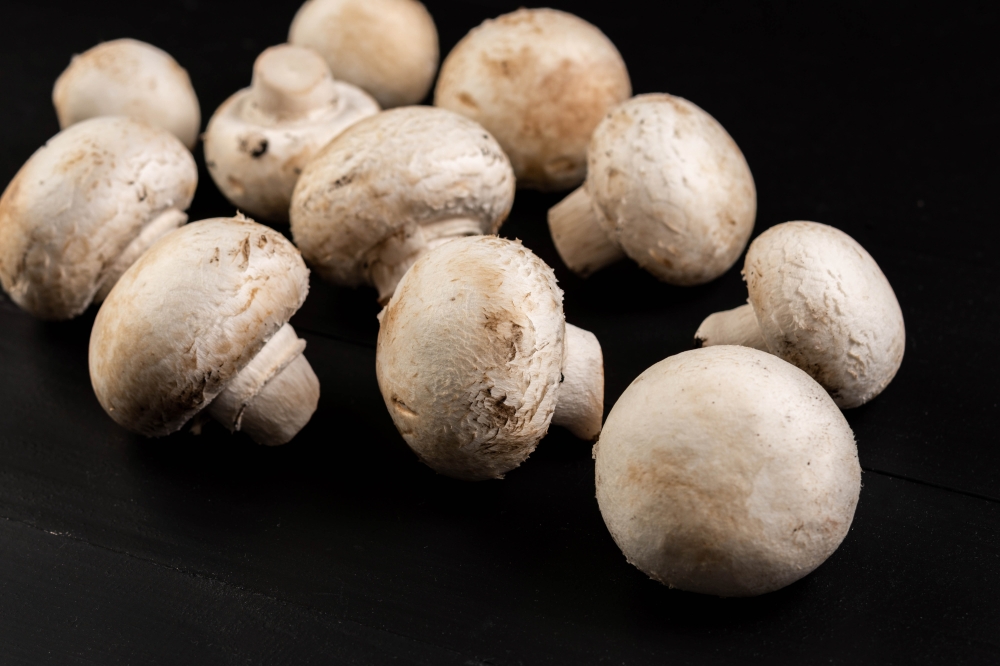 It is still several months away from the wild mushroom season, the la chasse aux champignons, which is a national pastime here every autumn in France. I am intently looking forward to it and have been sharpening my mushroom knife in anticipation.

As mushrooms are one of my favourite foods, I thought it might be interesting to explain a few things about them. As few people will ever get to pick clitocybe nuda or slice the stalks of boletus pinicola, I will discuss only the commercially farmed varieties today. If you are interested, some details about last year’s wild mushroom season is described in my previous article, Autumn tales from rural France.

Until a few years ago, most of what we call “mushrooms” in supermarkets are from a single species called Agaricus bisporus. There are two variants of this species: a white variety and a nutty brown variety.

Despite the difference in price, both white and brown varieties taste exactly the same so there is no requirement to pay more for the brown variety. In its immature state, the white variety are sold as button mushrooms, crimini mushrooms and champignon paris. When immature, the brown variety are marketed as Swiss browns, Roman browns, Italian browns, cremini mushrooms, or chestnut mushrooms. Fully-matured Agaricus bisporus are generically known as Portobello mushrooms and can be white or brown. In other parts of the world, you will likely find even more regional mushrooms in the markets. For example, in Bavaria, Germany, I have come across local waldpilze varieties such as Krause Klucke, Steinpilz, Semmelstoppel, Rotkappe, Nelkenschwindling, Schafsporling, Maronenröhrling, etc. I do not actually know what species they are but they are often found in the local dishes, and they are delicious. Unfortunately, they are not commonly available outside Germany so if I need them, the only option is a flight back to Berlin where they are sometimes available.

One curious thing about mushrooms is that they are not plants and of course they are not animals either. Although we all know them as fungi, edible mushrooms are only found in the Basidiomycota and Ascomycota divisions of the sub-kingdom Dikarya with the Fungi kingdom.

As an aside, the Ascomycota division is the largest phylum (or grouping) of the Fungi kingdom with over 64,000 different species. Ascomycetes are defined by the “ascus” (Greek for “sac”) which is a microscopic sexual structure where spores are formed.

Common examples of ascomycetes are the yeasts used for brewing and baking, and more importantly the penicillium species which are used to produce (usually) blue cheeses and various antibiotics. The Aspergillus species used in the fermentation of soy sauce is also an ascomycete. Unfortunately, most ascomycetes are potent pathogens to both mammals and plants, and can be deadly to humans and ruinous to crops.

In the past, mushrooms were usually identified or classified by “spore prints”, the powdery image left by spores falling from the gills of mushrooms onto pieces of paper. These days, chemical tests and DNA analysis are available to detect certain types of mushrooms, though most people still rely on pictures in guide books. If you’re looking to forage for mushrooms, it is best to go with someone with experience as mushroom poisoning can be serious. Photo: Aleksey Gnilenkov/Flickr

While guide books can definitely be useful, it is much better to have someone knowledgeable guide you through a few mushroom hunts before going on your own as mycetism (mushroom poisoning) can be very serious.

Although most supermarket mushrooms can probably be eaten raw, people generally prefer to cook them as the fungi can be used to add flavours to dishes or even eaten as a dish by itself. This is one area where mushrooms should be treated differently from other foods.

Many people would know that overcooked vegetables tend to turn into mushy goo, while overcooked meats taste like dry, flavourless cardboard. However, mushrooms tend to resist overcooking much better than other foods. And this also explains why mushrooms taste “meatier” than vegetables.

The reason why mushrooms resist overcooking is because cells in mushrooms are formed from a compound called chitin, the same compound found in the exoskeletons of arthropods such as crustaceans, insects, scales of fish, etc. Chitin is formed from long chains of a monosaccharide sugar called N-acetylglucosamine and is remarkably heat stable, holds it shape well, and will not coil into tough bundles under heat like meat proteins nor disintegrate like plant cells, which tend to be held together by a compound called pectin, which breaks down easily under heat.

In fact, mushrooms are often the only whole non-meat ingredient still recognisable in a long-cooked stew.

Anyone who loves fried mushrooms probably made the same mistake as when I started frying them. I found that mushrooms can absorb prodigious amounts of oil – even 200 grams of mushrooms could use up a quarter of a bottle of olive oil. They taste great but even I was uneasy about the amount of oil I was ingesting. So where did all this oil go in the mushrooms?

It turns out cooking oils end up getting trapped in the hyphae of the mushrooms. The hyphae is a collection of cells surrounded by tubular cell walls made from chitin. These structures hold a lot of air, which also explains why mushrooms tend to feel light in the hand. When cooking, the chitin structures remain stable while the pan heat drives the air out from the hyphae – the air is then replaced by sucking in the cooking oil. Mushrooms do not require much oil for cooking. Photo: Sandra Holt/Flickr

A much more healthy way to cook mushrooms is therefore to ensure the chitin tubes in the hyphae are filled first before using any oil at all. Oil would only be needed to brown the mushrooms before eating. Since we now know that the chitin tubes can act like microscopic straws, this can also be a good time to add extra flavours to mushrooms.

So when frying mushroom, add a good splash of either plain water or some form of stock to the pan at the beginning, then cook until the mushrooms have softened and absorbed the original liquid. If they look under-cooked, add a bit more liquid if necessary. Then when the mushrooms have absorbed all the liquid and are starting to look dry, add a little oil to the pan and cook till brown. As a final touch, add some butter near the end of cooking to impart extra flavour and sprinkle on salt and pepper before serving.

Interestingly, there appears to be a lot of research into using mushrooms or fungi for creating viable substitutes for meat. The hollow structure of fungal hyphae can act as an absorbent foundation for flavour compounds delivered as liquids. Then the ability of chitin to maintain its structure and textures under heat means there is potentially a lot of flexibility in how flavours and textures can be created using mushrooms or fungi material as the base ingredient used in combination with other vegetarian materials.

Curious Cook: All about mushrooms