The balik kampung experience is synonymous with the festive holiday season in Malaysia. With Hari Raya just around the corner, the thought of being back in our hometown certainly warms the heart.

While the idea of reuniting with family and friends instantly puts a smile on many faces, another great thing about the balik kampung trip is the food. Tucking in delectable cuisines is something that many look forward to doing in the holiday seasons.

This Raya holiday, how about going on a Malaysian food trip with your nose (and stomach!) as your guide? We’ve tracked down some signature dishes from the many states in the country to start you off. Nasi kerabu is usually served with a fresh salad of herbs and raw veggies.

The word “kerabu” is a reference for salad, an apt name for this wholesome rice dish. Served with an assortment of fresh herbs and raw vegetables, this dish is the personification of health served on a platter. As the vegetables are eaten raw and fresh, the dish is high in fibre, vitamin and antioxidants.

Of course, a defining quality of nasi kerabu is the blue-coloured rice, a result from cooking with butterfly pea flowers. While there can be many variations, a complete serving of nasi kerabu in Kelantan consists of several components: rice, herb salad, a coconut and fish relish, sambal and various condiments.

If nasi lemak is the most popular breakfast meal in the west coast of the peninsula, then nasi dagang takes the honour in the east coast. In fact, some of the popular stalls selling the dish that locals frequent would have sold out as early as 10am.

In Terengganu, the nasi dagang – which literally translates to “trader’s rice” – is a combination of fragrant rice and sticky rice, making for an addictive pairing indeed! Nasi dagang is usually served with gulai ikan tongkol, an aromatic fish curry with a rich and thick texture. It also comes with a serving of acar timun (pickled cucumber, carrot and onion). Something that separates laksa in Johor from laksa in other states in Malaysia is the usage of spaghetti noodles. It is believed that Sultan Abu Bakar instructed his royal chefs to use pasta instead of the traditional rice noodles. The rest, as they say, is history.

European influence aside, laksa Johor is also unique because it’s served with a thick gravy. The broth is made from ground chilli and spices, coconut milk and fish. However, sometimes other fresh seafood also make their way into the dish. Don’t be surprised to find spaghetti noodles in your laksa Johor!

You will find a combination of sour and spicy notes in this signature dish from one of the country’s most historical states. A favourite among the Peranakan community, this red-hued broth is made with tamarind juice as well as a range of spices.

The main ingredient here is usually fresh water fish, but it’s not uncommon to find versions with other seafood. There’s also a variety of greens added such as okra, eggplant and long beans. Asam pedas goes great with a bowl of steaminghot rice.

Deliciously rich and spicy, this dish is a fine representation of the masak lemak cooking style. The Minang cooking method – which usually includes turmeric with creamy coconut milk – is particularly popular in Negri Sembilan.

The locals here love a good serving of heat, and masak lemak cili api delivers that through the usage of copious amounts of spicy chilli. The creamy gravy is usually served with meat, seafood and vegetables. If you can’t take spicy food, then the delicious masak lemak cili api may not be for you.

There’s satay … and then there’s satay Kajang. Brought into the country by the West Javanese towards the end of World War I, the skewered meat is found in abundance at this town in Selangor today. Satay Kajang has gained a reputation for being perfectly tender and flavourful.

What separates Kajang’s satay from the West Javanese one is the chunks of grilled fat. Chicken and beef are the most common variant, but there are other more “exotic” offerings too. Rabbit, venison and duck, as well as liver and gizzard can also be found on the menu. Satay is synonymous with the town of Kajang in Selangor.

It takes a skilful cook to eliminate the muddy smell of freshwater silver catfish when preparing this dish. Even then, gulai tempoyak ikan patin is an acquired taste. That’s because the other main ingredient here is equally pungent – tempoyak or fermented durian paste.

Don’t let the ingredients deter you from this wonderful dish though, which is popularly found in Temerloh. The fatty texture of the fish is definitely the highlight of the yellow and slightly watery broth. If you’re ever in Temerloh, try the gulai tempoyak ikan patin.

The origins of rendang tok is one that’s steeped in regal history. It is said that the dish is created by palace cooks and were only served to the Perak royal family in the past. Today, the dish can be enjoyed by everyone.

Rendang tok is characterised by the ample use of spices, lemongrass and cekur root. The texture is also much drier that the normal rendang, with a darker colour. This is because the dish is slowly cooked, resulting in a meat that’s more flavourful. Rendang tok is not your typical rendang as it is more dry and flavourful. 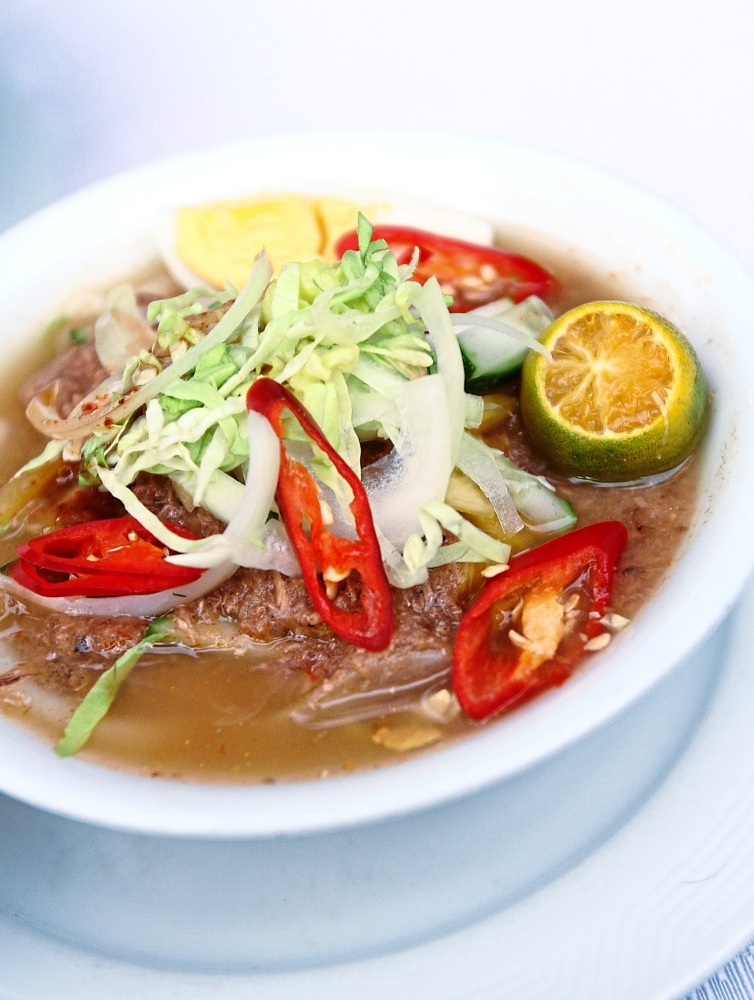 A typical serving of laksa in Kedah comes with some coconut sambal.

The more commonly known variation of laksa would probably be the those found in the northern states in the peninsula. Laksa here is distinguished by its fish-based asam-tinged gravy and freshly-made rice noodles.

In Kedah especially, the broth’s texture is light with a delightfully sourish taste. The laksa is also served with a dollop of sambal nyiur (coconut sambal), heaps of cucumber, onion and herbs like daun kesum. Let your server prepare the best combination of gravies for your nasi kandar.

There’s an abundance good food in Penang, and nasi kandar is certainly a strong culinary contender. Originally a meal for labourers, nasi kandar today is a fantastic treat that is served throughout the country.

A plethora of meat and vegetable choices are available to choose from. But the signature trait of nasi kandar is the mixture of various curries. The sight of the server deftly scooping up the gravies is an experience in itself. Ikan bakar in Perlis comes with a special dipping sauce.

Sure, ikan bakar or grilled fish can be found almost anywhere in the country. But there’s just something about the simplicity of charcoal-grilled seafood prepared in the smallest state in Malaysia.

The fish is usually marinated in turmeric, salt, pepper and grilled to smoky perfection. The secret to the ikan bakar in Perlis lies in the sauce. The dipping is made up of red chillies, oyster sauce, fish sauce, Thai chilli sauce as well as a dash of salt and pepper.

The name of this dish comes from the colour of its rice, which is a vivid shade of yellow. The colour comes from turmeric and is cooked with coconut milk. Nasi kuning may seem like a heavy meal but it is usually only available for breakfast.

Nasi kuning is the breakfast of choice for some Sabahans in the east coast. It is typically served with chicken, fish or eggs. As for the sambal, it is made from ground pepper, soy sauce and shrimp paste. Those with an aversion to heat would be relieved to find out that it’s usually not too spicy.

Few dishes from the Land of Hornbills enjoy the kind of universal popularity like its laksa Sarawak. It was even featured by the late Anthony Bourdain in his show No Reservations in 2005.

Presentation-wise, laksa Sarawak is very colourful. Components include rice vermicelli, shredded omelette, strips of chicken and prawn. The highlight would be the magnificent broth served with sambal and lime on the side. While there are many stalls selling the dish in Sarawak, the recipe is closely guarded by the owners and the taste can only be replicated at home from commercial paste. Laksa Sarawak is very hard to replicate at home because its original recipe has never been publicly shared.