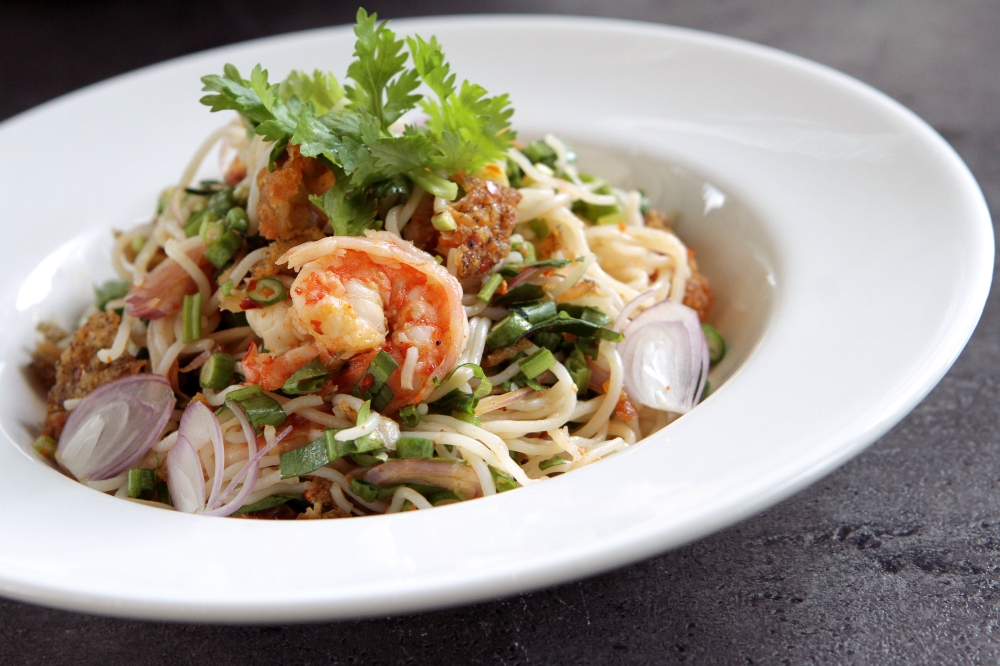 On a quiet Friday afternoon, sunlight filters into La Moon, lending the space a radiant glow. The eatery is a small, charming affair with high ceilings and glass draped all around, perched on a relatively traffic-free stretch in Taman Tun Dr Ismail, Kuala Lumpur.

But the place is perhaps less important than the person helming it – in this case, the redoubtable Trakool Yodsuk, better known as Chef Korn.

Korn was once behind one of Kuala Lumpur’s most hallowed Thai restaurants: Erawan, named one of KL’s best restaurants in 2017 by CNN Travel.

Although that chapter of his life is behind him, fans of his work will be happy to know that the man and his considerable cooking skills are back in business at La Moon. With La Moon, Korn aims to do simpler Thai food that is more reminiscent of the home-cooked his mother used to make. – YAP CHEE HONG/The Star The eatery exudes an instant charm and warmth.

At La Moon – which Korn and his team put together in five days – you’ll find a mixture of authentic home-style Thai food interspersed with innovative meals strung together based on Korn’s deep-rooted understanding of Thai flavours (his pedigree includes a grandmother who once cooked for King Rama VII).

Aside from the permanent menu, Korn also exercises his creative muscles in his specials menu, which changes depending on what’s available from his suppliers or at the nearby Taman Tun market, which he frequents every day.

“My special of the day is supposed to be one or two things, but it’s like five or six items now because I just want people to try different things,” says Korn, laughing. The laksa salad is a wondrous joy that is fresh, zesty and delicately herbaceous.

Start your Thai-venture with the laksa salad (RM30) which features all the flavours of a Thai laksa, embedded in the format of a salad.

“When people think of Thai laksa, they think of gravy with coconut milk but not everyone wants a heavy laksa, so this is very light,” says Korn.

The salad is – as promised – very light, accentuated with fat, fluffy prawns, crispy fish and crunchy fresh shallots intertwined in the mixture. Overall, you’ll discover a delicate balance of flavours and a delightful herbaceous undertone underscoring the long list of attributes in this meal. ‘Yummy’ doesn’t even begin to describe the sublime deliciousness of the sweet corn salad.

Perhaps the biggest revelation at La Moon will take shape in the form of the seemingly simple sweet corn salad (RM30). Here, sweet corn, dried prawns, cherry tomatoes and salted eggs forge an unforgettable union with a salad dressing that has the perfect balance of sweet, sour and salty. It is an epic meal, one where the glorious coalescence of bright, exuberant flavours proves so memorable that it will ultimately become permanently etched in your brain. A recurrent feature in most Thai homes, the homemade sambal with young mango is a triumphant ode to flavour-balancing that goes perfectly with the vegetables on the side.

Next up, try the homemade shrimp paste dip with condiments (RM38). According to Korn, this is a meal that is typical in most Thai homes, as it can be eaten by everyone. Here, the condiments take the form of decorously arranged vegetables, made up of artichoke hearts, deep-fried brinjals, cucumber as well as omelette and fried fish. The condiments are meant to be dipped into the homemade dip, made up of Thai shrimp paste, garlic, chillies, palm sugar, lime juice, fish sauce and young mangoes.

This is a meal that is astoundingly good. The dip is the genius masterstroke of the dish – a thick, slightly spicy affair that has a light saltiness from the shrimp paste and pairs remarkably well with all the vegetables on offer. It is a simple meal that ticks all the right boxes and will have you making ‘I heart you’ signs after the first mouthful. The tender beef green curry (RM38) is a feature on the specials menu and boasts beef cooked for a considerable period of time to ensure total pliancy. The curry is delightful – thick, creamy and packed with flavour, while the beef is as tender as the menu advertisement indicates. The best part about the curry though is the addition of the young cili padi in the mixture. These tiny little green buds offer pops of potent heat guaranteed to set tongues a-tingling.

The deep-fried grouper with lemon sauce (RM58) is Korn’s tribute to his father, who used to cook something similar before. While the fish is fried well and the dish is perfectly copacetic, the overall impression you might get is that the meal lacks oomph and as a result, you’re likely to quickly forget it. The coconut top with prawns is a light, flavourful meal that really highlights the natural qualities of the coconut.

The menu also boasts some slightly unusual ingredients like coconut top stir-fried with prawns (RM38). The coconut top or palm shoot is obtained from the tops of coconut trees and requires the entire tree to be felled before the shoot can be obtained. As a result, it is quite a hard ingredient to find, although Korn says he has been lucky enough to get a weekly supply for now.

Because the coconut top is so delicate, Korn has merely stir-fried the prawns and shoot in abalone sauce, giving diners the chance to truly taste the exquisite sweetness and soft bite of the coconut and the fleshy tenderness of the prawns. 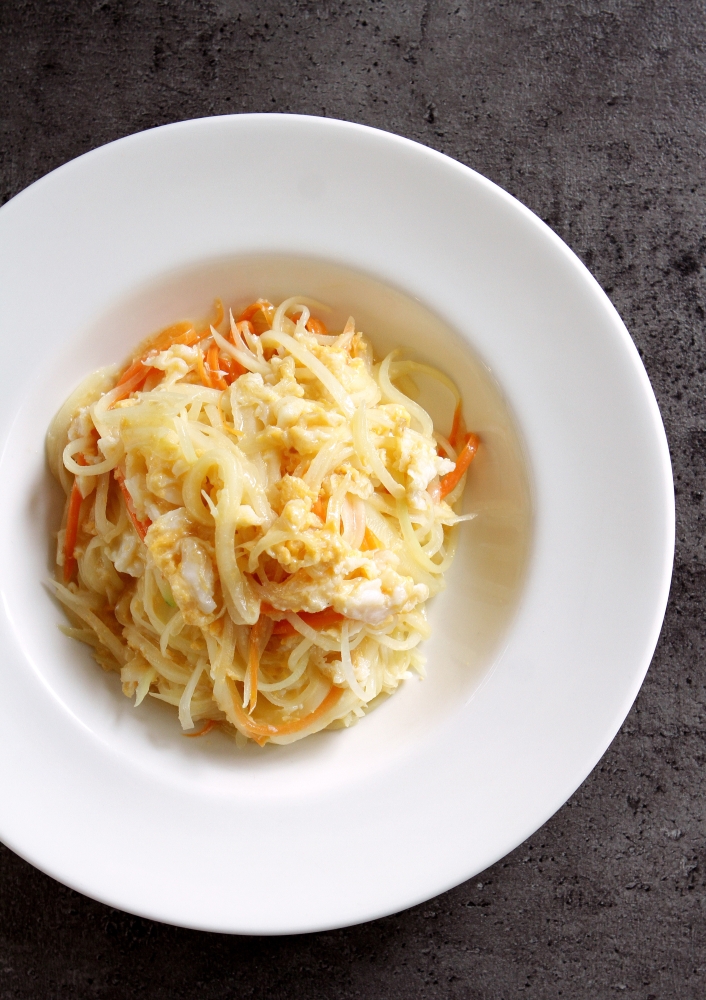 The stir-fried papaya with egg features thin strips of papaya against fluffy egg in what proves to be an inspired pairing.

End your meal here with another vegetable option, this time the interesting-sounding papaya with egg (RM30).

“Not many people know about it, it’s like kampung food. The dish came about because last time, there were no supermarkets, so people would use whatever they had in their gardens, like papayas, which would be shredded and stir-fried as vegetables. So this dish is very nutritious, healthy and old-school,” says Korn.

The dish is really good – the papayas still retain a bit of crunch and this is juxtaposed with fluffy bits of egg in what proves to be a light, wholesome meal that is akin to a gentle lullaby that expertly soothes frayed nerves.

Although Korn’s aim at La Moon is to make more accessible Thai food, he says he still gets requests for more up-scale menus, something which he is looking to cater to soon. This will take the form of a space one floor up from La Moon, where guests will be able to book curated meals or even plan experiential market-to-table meals with him.

“The second project is coming up because we have people requesting for exquisite food – they want the chef experience concept. So for this, we will work together with customers – if they want have certain things, we will plan it together with them to create a great experience, so it will be very personalised,” he says.

A rich array of Thai food at La Moon

Previous Article: Curious Cook: How seedless fruits came...
Next Article: How to instil the love of...