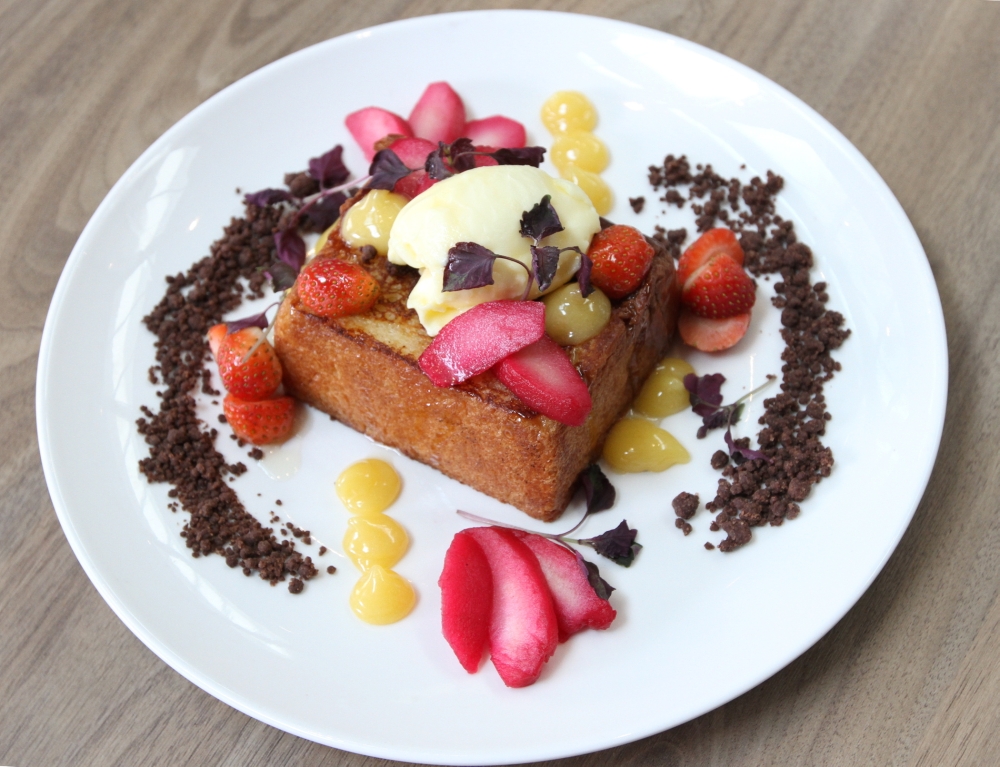 It’s hard to contemplate even finding a cosy corner in a sprawling shopping mall, but Snitch by The Thieves in Kuala Lumpur is just that sort of space.

Although the eatery is large – about 740sq m – the space is portioned out carefully. The entrance leads to a warm, cheery main eating area with gorgeous, bedecked cakes on display out front and a proximity to the mall close enough for those who are famished and ready to conk out after a day of retail therapy.

If you’re after a more rustic space, another door leads to a covered area where sunlight streams in and fans whirr gently overhead. This is the sort of space that’s ideal for dreaming, chilling out or sharing furtive secrets with a good friend. There’s also a speakeasy – a relaxed, casual spot where you can easily imagine having a good time after hours.

The eatery is the brainchild of the people behind popular breakfast spot The Breakfast Thieves in KL (which is itself an outpost of the popular Melbourne outlet in Australia).

The local outlet has gained rave reviews and massive crowds since its inception a few years ago but with Snitch, chef-owner Brandon Chin Yoon Foong and business partner Joel Teh Yi Weng decided to go a slightly different route, a point of differentiation that starts with the location they’ve chosen. Chin (left) and Teh are the people behind Snitch, which shows off slightly more local fare than its predecessor.

“We’ve been talking to mall reps these past few years but we’ve been slightly picky, because we understand that the whole concept of Breakfast Thieves is not too mass, it’s not your everyday local food, so it’s quite hard for us to replicate.

“But when they offered us this lot, it was a nice space and it fit well in terms of concept,” says Teh.

While Breakfast Thieves is known for its Melbourne breakfast staples, the food at Snitch includes local fare like curry laksa, nasi lemak and mee jawa.

“In terms of food, the mall has a wide demographic, so if we want to stick to just Melbourne-style food, I think that would scare people away or people would just go back to Breakfast Thieves, thinking ‘Why should I come here instead?’

“So we thought why not incorporate local comfort food on the menu?” says Chin.

So Chin – who spent 14 years in Melbourne cooking primarily European food – trawled through his mother and grandmother’s recipe arsenal to figure out how to make authentic local meals like mee jawa and curry laksa.

“My late mum was from Perak, and she and her sisters had a little cart selling mee rebus and hor fun soup. She used to cook things like that all the time but it’s something I’ve never tried making before. So it was a challenge for me – I think making Asian food was the hardest thing in my whole career,” he says sincerely.

Start your culinary adventure here by quenching your thirst with one of the house-made drinks like the summer paradise (RM14), a refreshingly tropical beverage that has delicate fruity undertones. 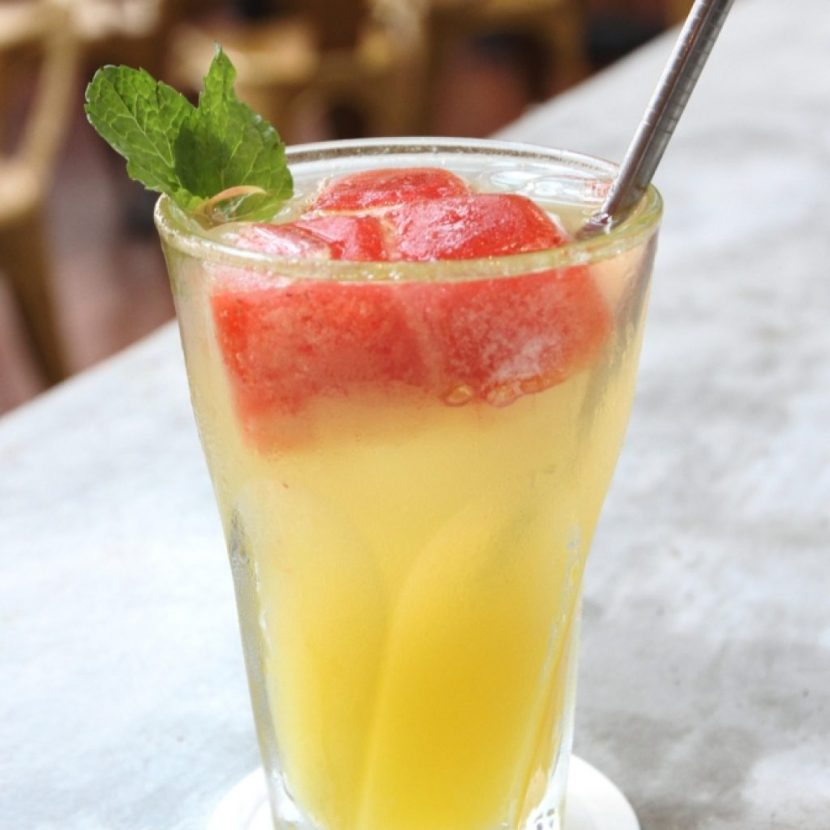 Summer paradise is an apt name for this refreshing, tropical drink. Mee jawa is one of the dishes that Chin’s mother taught him how to make.

Then, indulge in mee jawa (RM13). The sweet potato-thickened gravy is enhanced with shrimp crackers, fried tofu, bean sprouts and hard boiled eggs in what proves to be a sweet, harmonious confluence of flavours. The dish is evocative of traditional versions you might have tried on street corners and hawker stalls, albeit with a more refined touch.

The curry laksa (RM13) is a dish that gave Chin a fair amount of grief when he opened Snitch. Feedback was so bad at one point that one customer even relayed a particularly harsh message: “Your laksa sucks!”. Chin initially didn’t get great reviews for his curry laksa, but he has worked on it to the point that the flavours really come through.

Chin took that as constructive criticism and went to work on the dish. As a result, the homemade laksa is a good rendition of the real deal, with a thick, coconut milk gravy, vermicelli, tofu puffs, prawns, bean sprouts and shredded chicken. The laksa could be a tad spicier but other than that, the flavour balancing is fairly spot-on.

For a return to familiar brunch territory, opt for the French toast (RM19) which is essentially a thick plank of French toast enhanced with lemon curd, chocolate soil, honey mascarpone and berry compote. The lemon curd is the star of this offering, offering zesty pops of exuberance that you can slather all over the warm, buttery bread. The omega + hash is pleasant but doesn’t really leave a lasting impression.

Although the omega + hash (RM21) is incredibly pretty to look at, with an ingredient list that includes house-cured salmon, potato hash, mushrooms, cherry tomatoes, poached eggs and vichyssoise (a traditional thick French soup) to bind it all together, in the taste stakes, it doesn’t really sparkle in any discernible way, which means if this is the only meal you have here, you might be a little disappointed.

The black pepper beef udon (RM20) is essentially wok stir-fried black pepper beef, udon, capsicum and snap peas. The pepper undertones and essence of the wok really come through in the entire meal, which features ingredients that work well together.

The Philly cheese steak baguette (RM25) isn’t much to look at, but looks can be deceiving because as it turns out, the grilled steak slices, cream cheese and cheddar, leeks, caramelised onions and cherry tomatoes in this amalgamation might just end up stealing your heart at first bite. The steak is the key figure here, and outshines its cast members with delightfully meaty overtures that will have you begging for an encore. The slightly unusual addition of cocoa nibs adds a real depth of flavours to the classic red velvet cake. The lemon and rose almond sponge is as delicious to eat as it is to look at.

For dessert, there’s plenty to whet the appetite. Snitch has a pastry chef in-house so everything is made from scratch with fresh ingredients. Check out the red velvet (RM15), a delightfully dense rendition of this classic cake interspersed with the unusual – but inspired – addition of chocolate nibs, lending texture and light chocolatey overtones to it.

The lemon and rose almond sponge (RM14) is another surefire winner with a texture that is moist and crumbly. The cake is a little sweet but is redolent of light almond flavours, enhanced by a rich floral essence infusing every mouthful that you take.

It took a few years for Chin and Teh to come up with Snitch, and they are in no hurry to expand further.

“In the Malaysian F&B scene, when a brand becomes hot, it branches out everywhere and this kills the brand. That’s why we didn’t expand so fast, because every place has its own market. For now, we will take time out because we have a lot of things to improve at Snitch first,” says Teh.

Brunching out at Snitch by The Thieves

Previous Article: Cooking the Books: Getting back to...
Next Article: 4 unique traditional kerabu recipes to...