And if you choose to sit at the tables near the entrance on a hot afternoon, there is the added pleasure of being able to enjoy the warm glow of the sun streaming in as you slip off your shoes and sink your feet into a mass of stones underfoot.

“We wanted the restaurant to feel like an old-fashioned courtyard garden in a traditional Peranakan house in Melaka,” says Alicia Lim, one half of the husband-and-wife duo behind the restaurant.

On that front, Lim and her husband Derson Tan have certainly hit all the right Instagrammable high notes with the aesthetics of the space.

But then again, the two aren’t newbies to the F&B scene, having started another popular eatery nearly two years ago – Alison Soup House in Taman Tun Dr Ismail, Kuala Lumpur, which specialises in traditional slow-brewed soups.

Lim (left) and Tan decided to open Kampung to pay tribute to their Melaka heritage.

With Kampung, the two aim to pay homage to their Melaka heritage – Tan is from Melaka and Lim’s parents originate from the state too. The dishes at Kampung are Nyonya-influenced and have mostly been gleaned from Tan’s mother’s arsenal.

“My mother has cooked all these dishes for the family since we were young, but she doesn’t really have fixed recipes. When I moved away from our hometown, I always wanted to recreate her flavours.

“So I talked to my mum and asked her to list down the ingredients, then I tried to (make it) more structured so that we could put it on the restaurant menu,” says Tan, who has been cooking with his mum since he was a child.

Tan and Lim are also fastidious about using good produce, so both the pork and chicken at the eatery are antibiotic-free. According to Lim, everything in the eatery is made from scratch as she and Tan don’t believe in using pre-made items.

To begin your meal here, try the Melaka pork satay (RM19 for five sticks). The pork is suitably tender and juicy with bits of fat in between lending a malleable quality to the meat.

The exterior has a delightful char and the deliciousness of the meat can be enjoyed au naturel or with a serving of the pineapple-infused homemade satay sauce, which makes for an endearing accompaniment. 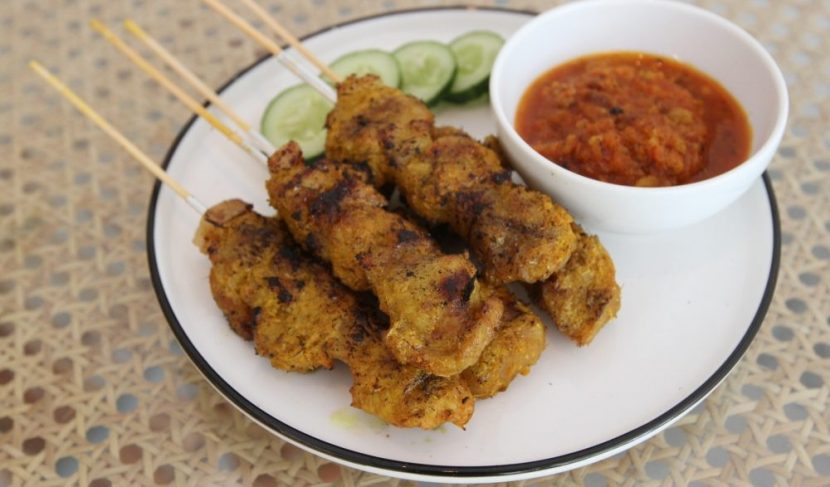 Tender and suffused with spice-laden undertones, the pork satay is a winner.

You could also opt for the Penang pork lobak (RM6 for two rolls). Although not a Melaka dish, lobak is one of Tan’s favourite Penang meals and he has done his best to recreate it. And he’s done a pretty solid job; the lobak has a crispy outer skin that yields to an interior that is juicy and has just a hint of spices.

Then there is the braised pork pongteh (RM26 for 1 to 2 people). This is a meal that is unabashedly good. The pork belly has been slow-braised for hours to elicit total pliancy and submission.

The sauce that surrounds the pork is built on a foundation of slow-cooked shallots, which in turn have lent a lovely sweet quality to the entire concoction. It’s a meal that is likely to extract oohs and aahs of pure, unadulterated pleasure. 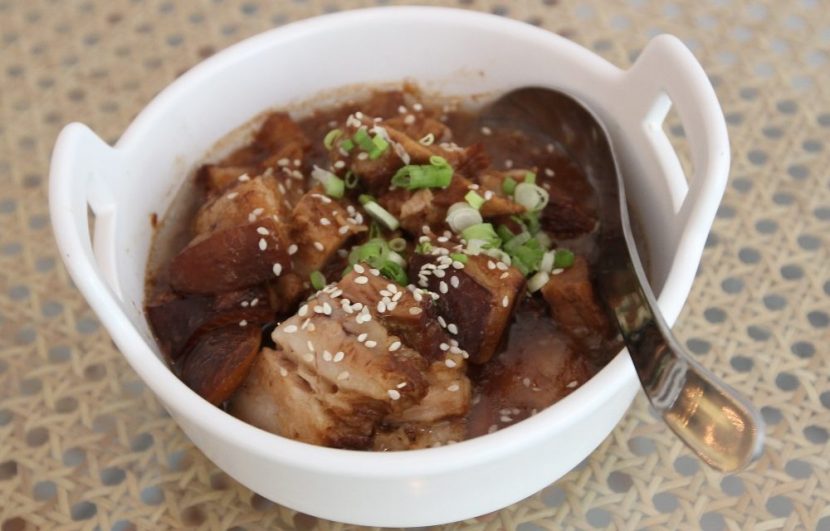 The Nyonya chicken rendang (RM21) is also from Tan’s mother’s repertoire and is made to her exacting standards. “It has eight different spices which are blended and slow-cooked with the meat. We also make our own kerisik (toasted grated coconut) unlike a lot of other places, so it really gives a fresh coconut taste,” says Tan.

The resultant rendang has a distinctly home-cooked feel about it and is both comforting and good, with a spice-laden underbelly perfuming and enhancing the core of this dish. The only slight quibble you might have with the meal is that the gravy coating the meat could be a tad thicker.

Perhaps the star offering at Kampung is the starfruit assam fish (seasonal price). While the assam fish recipe remains true to its roots, Tan and Lim didn’t want to add too much sugar to the dish so they experimented until they discovered that starfruit worked well in this configuration.

The result is stupendously good – this assam fish features a thick gravy that has zesty underpinnings and a robust flavour profile. The spice levels run as an undercurrent rather than undulating in waves, so you won’t feel intense heat. What you will feel though is the beginnings of a serious addiction, as you lap up one mouthful after another with no hesitation whatsoever. 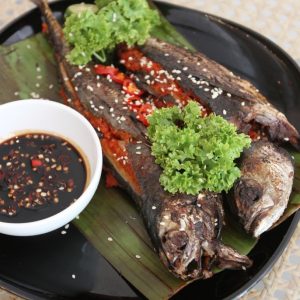 The ikan cencaru sambal sumbat could do with punchier sambal flavours.

Unfortunately, the same cannot be said of the ikan cencaru sambal sumbat bakar (RM28 for 1 to 2 people). The meal of grilled fish stuffed with sambal sounds delectable on paper, but in reality, the homemade sambal lacks oomph, heat and punch and as a result, the dish doesn’t really leave an indelible impression.

If you’re after something to cap your meal here, indulge in a cup of kopi (RM4). Lim learnt how to make this cuppa at her family’s kopitiam in Melaka, even spending a few days working in the place to ensure she got all the steps right.

And she’s right on the money too – this smooth, dark operator is sumptuous with an almost caramel-like undertone that is sure to find fans in coffee fiends.

Lim and Tan say they don’t have any plans to open more outlets yet, as they are too busy enjoying the simple pleasure of having realised their long-held dream of being in the F&B industry.

“A lot of people told us F&B is really risky, so we didn’t dare to step out at first. But one day, we just decided it didn’t matter – if you don’t try, you don’t know. So we just did it,” says Lim, beaming.