CHEF Baptiste Fournier’s entree – Artichoke Risotto with Confit of Tomato – was almost too pretty to be eaten as it resembled a miniature garden.

The risotto fence was sitting on a bed of tomato concasse; and surrounded by colourful pieces of cherry tomatoes, brussel sprouts, artichoke, parmesan tuille and edible flowers.

“It is considered a winter dish because of the richness of the risotto, but visually, it is more of spring,” he said.

The interesting flavours and presentation were a reflection of Fournier’s philosophy on food and cooking.

“I like to make sensual flavours and surprise people. My philosophy is to stay true to the ingredients, and not mask them.

“I want to make combinations that heighten the flavours of the ingredients when they are put together,” he said.

The other entrée for the night was the Lamb Saddle with Carrots in Fresh Orange Juice, Salt Flower and Cacao.

There was an art to consuming the dish, as Fournier explained that the lamb, carrots, orange, and mashed carrot and orange with 100% cacao were to be eaten individually first, then savoured together to enjoy the sweet, sour and crunchy flavours and textures.

The other main courses featured that night were the Poached Kingfish Fillet with Pearl Bean, Spinach in Lemongrass Chicken Broth, and Veal Chop served with Creamy Cep and Pommes Puree. 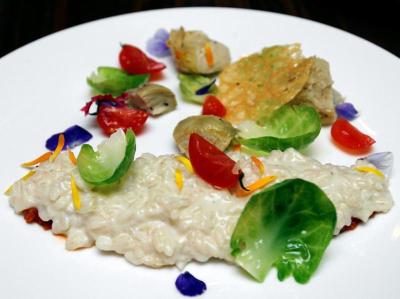 “I included the veal because I wanted Malaysian diners to understand what this traditional French dish tastes like.

“This dish not served in my restaurant, as it has to be done really well and will need a different approach if it were to be served there,” said Fournier, whose explanation was reminiscent of a certain popular animated movie featuring a rat who aspires to be a chef.

The 32-year-old, who was voted as one of the top six young chefs in France by the famed Gault Millau guide, recently returned to Kuala Lumpur to cook up a storm with Mezze Bistro head chef Yves Pierre Renou.

He took over as executive chef from his father, Daniel, at the family-owned La Tour at the young age of 29.

Fournier has taken the food scene in Sancerre by storm with his cutting-edge style and use of fresh ingredients.

Fournier marked his second visit to Mezze with a menu that is similar to what he serves at La Tour.

“It is not easy to maintain the quality of a restaurant. That is one reason why I regularly change my menu — to ensure that it keeps up to par and to entice returning customers with something new,” he said.

“I believe in serving dishes that people are not used to, so I’m constantly challenging and pushing myself to create something new.”

When asked where he gets his inspiration, Fournier cited a rather unique source.

“From my fridge! I get my inspiration by looking at the colours of the vegetables and the freshness of the ingredients. I also go with the seasons,” he said. 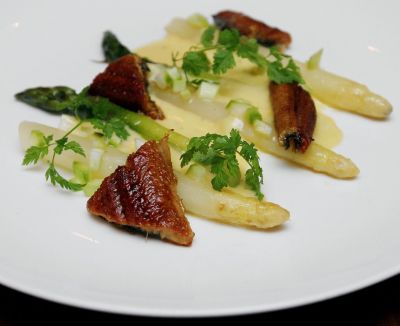 While the menu at La Tour is updated every three weeks, the menu at Mezze is changed every alternative day, hence even returning diners are unlikely to taste the same starter and main course twice.

Fournier’s menu at Mezze also included a mid-course dish, which he said offered an opportunity to showcase more of his culinary talents and flavours.

If his favourite dish tasted slightly familiar, it was because the French chef took inspiration from Asia to prepare the mid-course broth that was not unlike tom yam.

The Poached Red Snapper in Chicken Broth, Spinach and Lemon features a broth made of lemongrass, ginger and coconut powder, and personally recommended by the chef himself.

“Asian cuisine in general is healthy, which is why we take inspiration from Asia to enhance the flavours of our cuisine.”

Fournier presented diners with two surprises prior to serving their dinner, with an off-the-menu aperitif and amuse bouche.

The StarMetro team was presented with two starters — Slow-Cooked Organic Egg with Mushroom and Black Truffles Sabayon, and Duo of Green and White Asparagus with Caramelised Unagi.

The decadent dinner ended with desserts in the form of the Pineapple Ravioli with Lime, Basil and Yogurt Sorbert, and Iced Crispy Cappucino of Chocolate, Cream with Crumble, which would appeal to fans of savoury and sweet treats respectively.

The label features wines from the Sancerre vineyards belonging to Baptiste’s uncle and winemaker Claude Fournier.