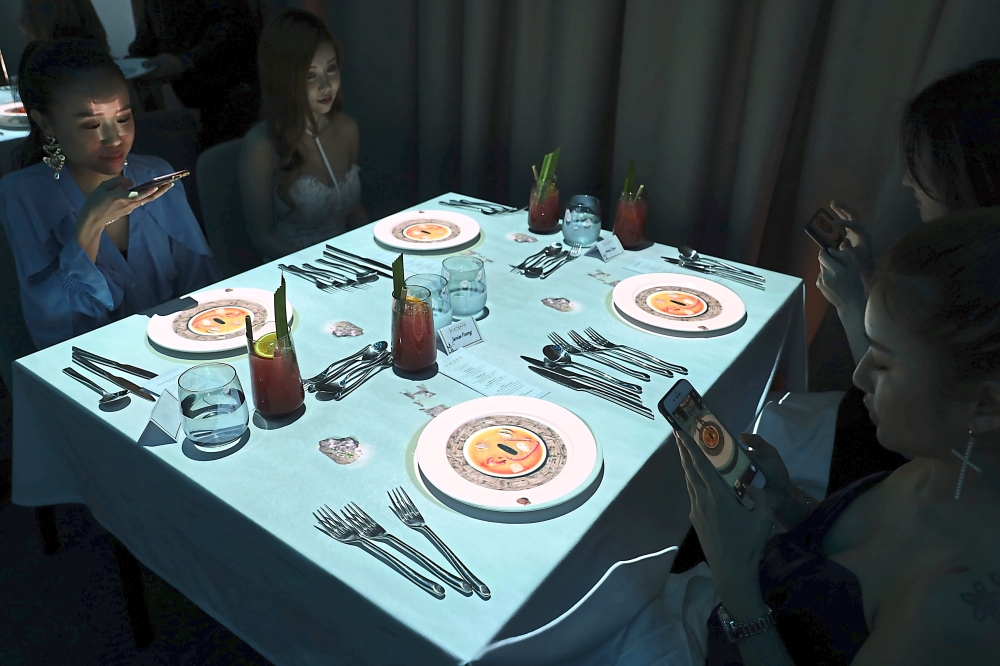 The little ‘un gets into all sorts of hilarious scrapes in his attempts to make delicious culinary concoctions, and each segment of the animation segues effortlessly into real-life meals presented to diners (cooked by real-life chefs), often bearing startling resemblances to the animations.

Since its introduction, Le Petit Chef has been a feature in cities like Toronto, Cologne, Basel, London and Stockholm, among others.

Now – for the first time – Malaysian diners will also be able to indulge in this immersive experience, exclusively at Elements KL in the Klang Valley. The eatery will host Le Petit Chef for the next two years; incidentally, Malaysia is the first country in South-East Asia to have Le Petit Chef.

The Le Petit experience seats a maximum of 36 people per session and starts at RM299 per person. Each session takes approximately 90 minutes from beginning to end. The gourmet aspect of the experience is taken care of by seasoned chef Jeff Ramsey (who earned a Michelin star working at the Mandarin Oriental Tokyo’s Tapas Molecular Bar). Ramsey admits that translating the videos into actual meals has been a bit of a challenge for him.

“It is a pre-determined visual so that’s the challenge, because it doesn’t leave a lot of room for interpretation and there are limitations to what you can do from a chef’s perspective, but I do want to make sure the food without the video can stand alone as a good product, so that’s why we’ve kept the food simple,” says Ramsey.

A Le Petit Chef meal begins with waiters adjusting the pure white plates on each table to ensure the projections can be seen clearly. Soon after that, diners get their first glimpse of the little chef, who as it turns out, is a mischievous little thing always up for a lark.

The preface to the first course sees the little chef plonked in the middle of the sea. His seaside adventure involves very realistic movements and sounds, including getting onboard a jet-ski and chopping off an octopus’ tentacles. 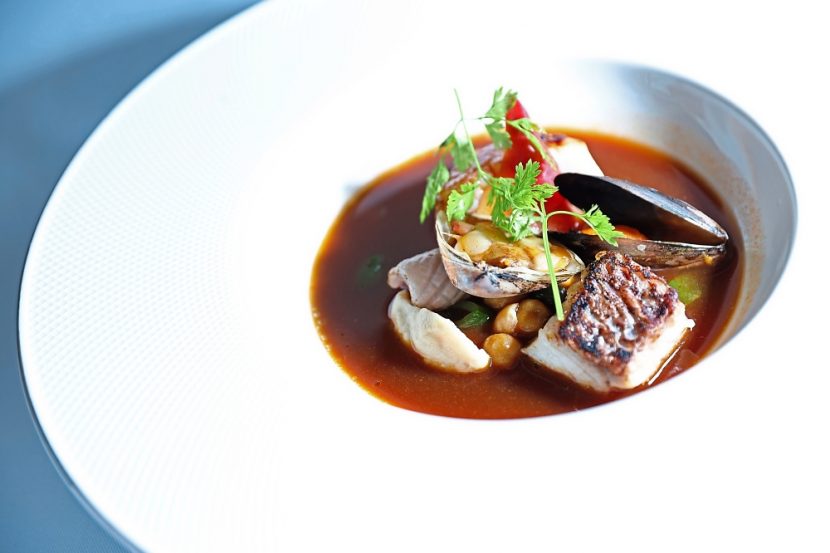 The first course of sea bream, Hokkaido scallop and Venus clam with a crab and prawn bisque is quite sea-tastifying.

Before long, the aroma of seafood begins to assail diners’ senses and soon a piping hot meal of sea bream, Hokkaido scallop and Venus clam with a crab and prawn bisque appears as if out of thin air, fluidly replacing the animation with the real deal.

In terms of reconstructing the animated meal, the first course does a great job. Taste-wise, it measures up too. The seafood is extremely fresh and has been cooked well, while the chickpeas coating the base of the plate offer a pleasant textural contrast. But it is the bisque that is the star here – you’ll feel the slightly briny essence of the sea in each mouthful.

The next animation sees the diminutive chef embark on an underwater escapade. The visual imagery in this particular scene is stunning, almost as though it has been plucked out of The Little Mermaid. Here vivid, aquamarine shades take centre stage, and sea creatures abound. The denouement of the episode is the little chef hauling up a giant lobster onto a plate. 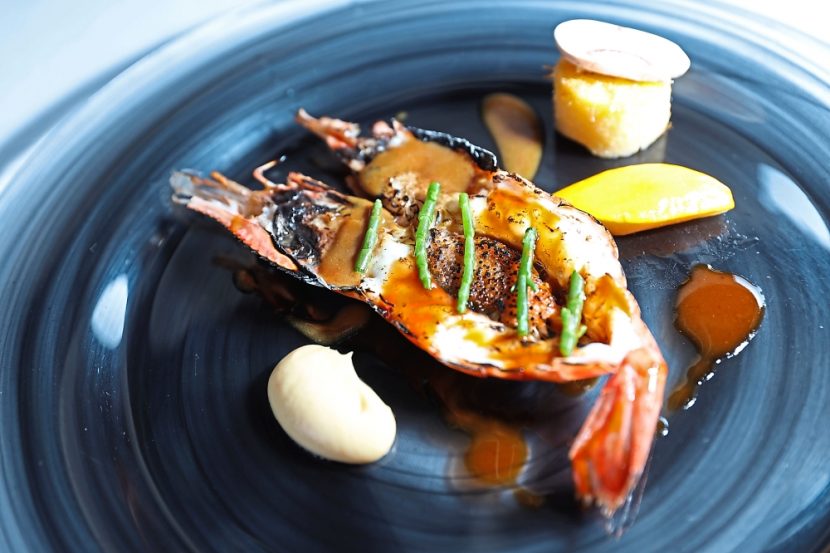 The butter roasted jumbo prawn is a far cry from a huge lobster but it is delicious on its own merit.

Admittedly, having seen that humongous lobster, the butter- roasted jumbo prawn that follows is a bit of a visual let-down. “Yeah, they put that big lobster on the plate but lobster is very expensive in Malaysia, so we have to balance dreams with reality,” says Ramsey pragmatically.

Thankfully, although the portion size doesn’t effortlessly meld from projection to plate, the taste does deliver. The prawn is tenderly yielding and packed with flavour and the polenta cake on the side makes for a competent sidekick.

For the main course, the animation and reality deviate slightly, but this ties in with very practical dietary concerns. While the cartoon depiction shows a huge slab of steak, the main course (depending on what you’ve chosen) could very well be roast aged chicken breast with truffle chicken jus, for diners unable to consume beef. 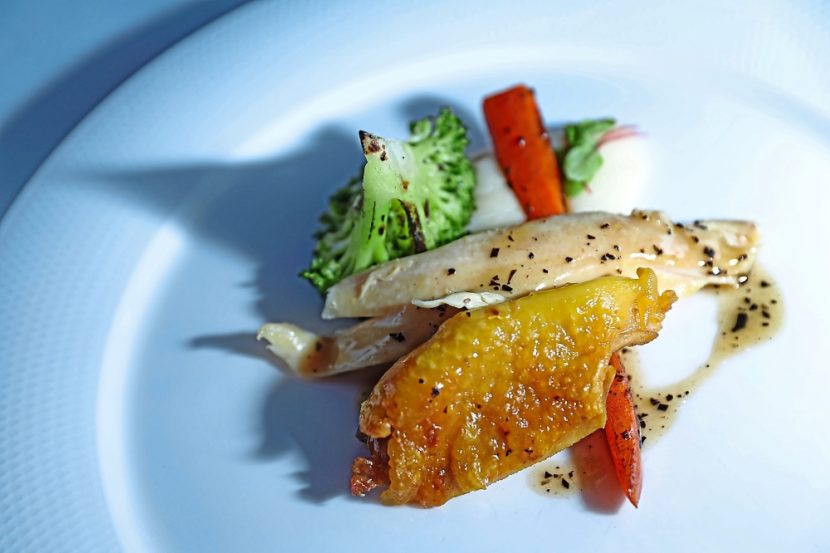 The roast aged chicken breast is a little lacklustre but the truffle jus makes up for it.

The chicken is tender but a little lacking in flavour, although this is alleviated somewhat by the delightfully opulent, rustic notes of the truffle jus. Surprisingly, the real revelation in this meal is the mashed potatoes, which are sensationally good. The spuds have an almost whipped, cloud-like consistency and are putty-soft with buttery undertones.

The precursor to dessert is probably the most engaging animation of the entire experience. Here, the tiny chef has a whole lot of fun in the snow, from riding on a sleigh to using a spoon as a catapult.

The dessert is fuss-free but hits all the right notes.

This imagery is quickly replaced with a simple dessert of malted vanilla ice-cream with caramelised milk, aerated Valrhona 70% dark chocolate and strawberry orange blossom sauce. This is an uncomplicated dessert that ticks all the right sweet boxes, although the fresh berries in the mixture are a little sour.

Overall, Le Petit Chef offers an interesting interplay of 3D animation and gastronomy, in what proves to be an innovative journey of exploration and discovery. Plus, the little chef is kinda cute too.