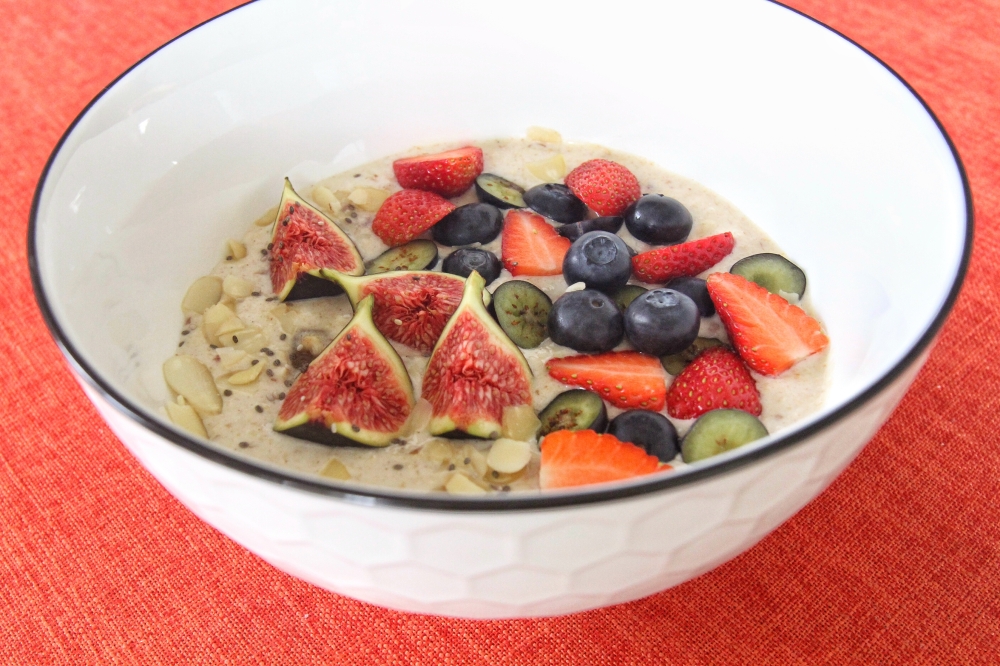 Ramadan is here, which means those observing the monthly fast have to get up in the wee hours of morning for sahur, the first meal of the day. This predawn breakfast is crucial as it provides the only sustenance and nourishment for the day until the post-sunset buka puasa, when the fasting is broken.

If you are looking for quick, convenient, healthy and delicious meals to prepare, celebrity chefs Nik Michael Imran and Anis Nabilah have these perfect recipes from their own sahur repositories.

“I never woke up for sahur. It’s a habit I learnt from my dad because he would not wake up for sahur as well. When I was little, every time Ramadan came around I was like, ‘Aiyoh, now I have to pray more!’” he says, laughing.

Nik, who shot to fame thanks to MasterChef Malaysia 2011, has since appeared on other TV shows like Tea Twist, Lunch With The Niks (a cooking show with his father Dato’ Nik Ezar Nik Bolia), and the recently completed Warna-Warni Asia. He also runs the F&B operation at co-working space Common Ground. 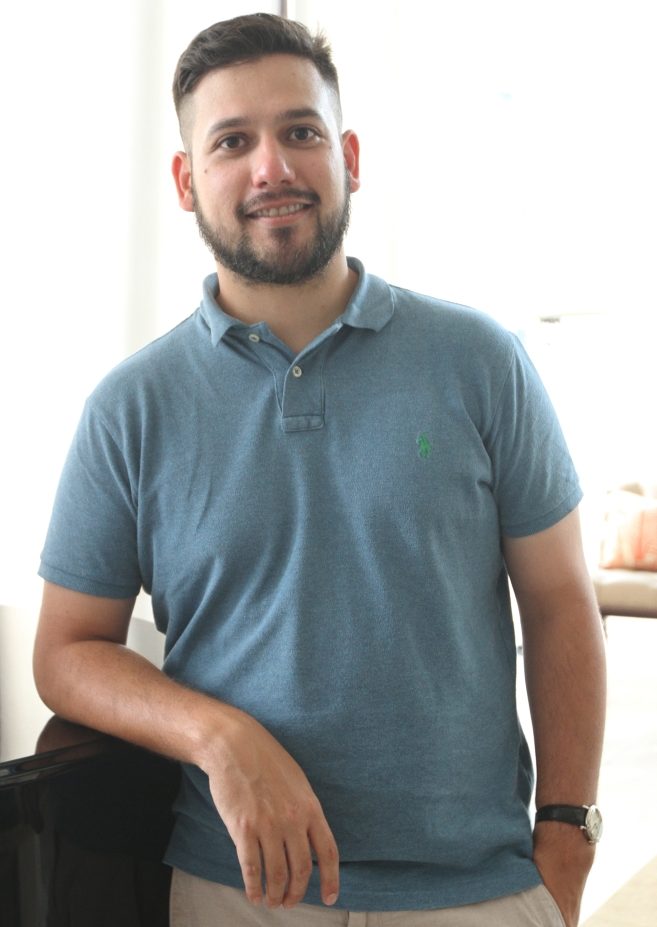 Nik says more and more people enjoy making quick, easy meals for sahur, which is exactly what he likes to make too. Photo: The Star/Samuel Ong

Given how busy he is, Nik says his perspective on Ramadan has done a 180° turnabout as he now looks forward to the holy month.

“It’s a very spiritual month for me. It’s when I detach myself from most earthly things and when I’m closest to God. You realise you’re maturing a bit when you actually look forward to being spiritual,” he says.

Nik has also become an avid cyclist and father of a four-month-old girl, so sahur has become increasingly important too as he needs to ensure his nutritional intake matches his rigorous fitness and fatherhood routine.

“It’s harder to get in your training sessions during puasa because you’re fasting. So what I do is have something light like kuih for buka puasa. Then after terawih prayers, I’ll have a small meal if I’m not cycling. If I’m cycling after that, I don’t feel like eating a lot, so then I’ll wake up for sahur,” he says.

Nik’s go-to for sahur include trendy meals like his refreshing and well-balanced salmon poke bowl, a take on the Hawaiian raw fish dish that typically includes rice and accompaniments such as seaweed, fresh and pickled vegetables.

Nik says trendy meals like poke bowls are perfect for sahur as you can use leftovers from the night before. Photo: The Star/Samuel Ong

“You always have extra rice from buka puasa which can be used, and you can change your toppings around. It could be extra fish curry or leftover rendang, anything can be used to top that bowl of rice. It’s the perfect dish for sahur because you can re-use whatever you have not finished,” he says.

Nik adds that once the raw fish is marinated in soy sauce, it can keep for three days, so you can make a large batch and use it later.

“The salmon poke itself, you can eat it instantly. It tastes good within five minutes of marination, although it is best to marinate it for 45 minutes. You can also marinate it for a few days or overnight. It just has a different texture as time goes on. Three-day-old salmon poke is still fresh, but it has a candy-like texture.”

Then, there is Nik’s nourishing bowl of oats, made fresh and topped with dates and a hot sliver of butter.

“We get a lot of dates at Ramadan, so you can cut it up and put it with the oatmeal. An oatmeal bowl is perfect nutrition-wise for puasa because you have the sugar and carbs that you need, and it still looks pretty,” he says.

Both meals take little time to prepare, and Nik adds most things can be tossed together on the spot or assembled the night before, ensuring that you don’t have to slave away for hours in the kitchen.

“People want something that’s quick because they don’t want to spend a lot of time in the kitchen, but they also want something that fills them up for the day, that tastes good, and even better if you can Instagram it! That’s what the trend is,” he affirms. For the base
250g cooked sushi rice, or reheated leftover white rice works well too

To make the salmon poke

Mix all ingredients together and marinate for at least 10 minutes. The marinated salmon can be kept in the fridge for up to 3 days.

Place a bed of rice into bowl. Flatten the top a little to make it easier and prettier to plate.

Arrange kyuri salad, edamame, pickled vegetables and salmon poke (topped with tobiko) into different segments but leave a little bit of rice exposed. On exposed rice, top with a sprinkling of furikake.

Serve with soy sauce and wasabi on the side (and some chopped chilli padi, if you’re like me). 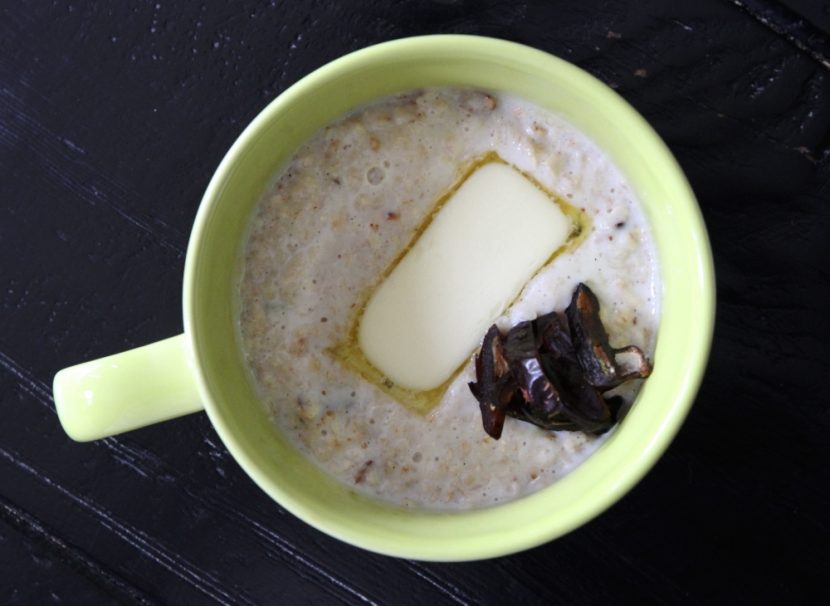 Add oats, milk and sugar into a small saucepan/pot and bring to a simmer on medium heat. Stir continuously but lightly for 3 minutes until consistency is of a thick soup. If too thick, add more milk.

Turn off heat and add the pecans and dates, stir swiftly to combine and immediately serve in a bowl. Add the pat of butter on top and serve hot. Anis Nabilah remembers being forced to wake up as a child, along with her seven siblings, to eat the first meal of the day at Ramadan.

“That’s when my late grandmother or my mum or dad would prepare food, and it was whatever was leftover from the night before, or something like fried rice or roti canai. It was always heavy food,” says Anis, a celebrity chef with over 35 shows, including 1, 2 Bakar, Icip-Icip and My Taste Of Hong Kong.

Having travelled and eaten various things in her career, Anis says these experiences over the years have made her grow to love Ramadan more, as this is when she spends the most time with her family as they typically break fast together every day.

Now that she’s has moved away from the family home, Anis feels motivated to wake up for sahur herself. “But it’s completely different. I don’t eat what I used to at my parents’.” she says.

“I have healthy stuff, things I know will provide the energy I need to last the day, like overnight oats. That’s one of my favourites. So I’ll just fix it in the night, wake up the next morning, and have it, and it’s enough to last me the entire day.”

Anis’ delicious overnight oats are filled with fruits, dates and nuts to perk up waning eyelids and rouse the spirit of those not used to waking up so early for a meal. Then there’s her bubur lambuk, a hearty meal filled with chicken, beef, prawns and rice that provides warmth and nourishment. Anis assembles her sahur meals the night before, so no cooking is required in the morning. Photo: The Star/Sam Tham

“Bubur lambuk is my mother’s recipe. She makes it only at Ramadan for buka puasa, but we’ll have it for sahur as well. It’s one of those things that’s nicer after sitting on the stove for awhile,” she says.

Anis ensures that most of her dishes are prepared the night before, so they are ready to eat in the morning. “I don’t really cook in the morning for sahur, because it’s way too early and too much effort to make for myself,” she explains.

“These two meals can be prepared the night before. The oats take 15 minutes, no more than that. Bubur lambuk takes a bit of time, but if you’re rushing, you can cook boiled rice instead of raw rice as this halves the cooking time from an hour to 30 minutes.”

Many of Anis’ sahur recipes are in keeping with her own eating ideals, as well as the healthy trend permeating through KL over the years. Ultimately, she says people are moving away from heavier fare at sahur in favour of meals that fill their bellies without inducing lethargy.

“When you start the day with something heavy, you just feel tired. And people are definitely more health-conscious nowadays. Last year I posted a picture of my sahur, which was overnight oats, and so many asked me for the recipe because people want something that is healthier and looks appetising too,” she says. Add more milk, as needed, so that oats are covered in liquid. You can also add fresh fruits after filling the jars half way through and top it off with more oats to create a layered look.

Cover and refrigerate overnight. To serve, top with more fresh fruit and sprinkle with almonds. Shell and devein prawns. Keep shells and set prawns aside. In a pot, add shells and water. Once boiling, reduce liquid to 2 cups. Strain mixture, removing shells. Set aside.

Boil rice in a pot with all the stocks/ broth, pandan leaves, lemongrass, blended onion, ginger, sup bunjut, fenugreek, chicken and beef until the rice starts to break apart and and you get a thick porridge consistency.

Add coconut milk, prawns and season with salt and pepper. Leave it to boil for another 5 more minutes.

Heat ghee in a pan and sauté shallots, onion, ginger, cloves, cardamom, star anise, and cinnamon sticks. Once fragrant, immediately pour everything into the pot of porridge. Give it a quick stir and garnish with garnishing ingredients.

Note: This article was originally published in Star2.

Previous Article: Berry yourself! This superfood is packed...
Next Article: The Le Petit Chef experience offers...