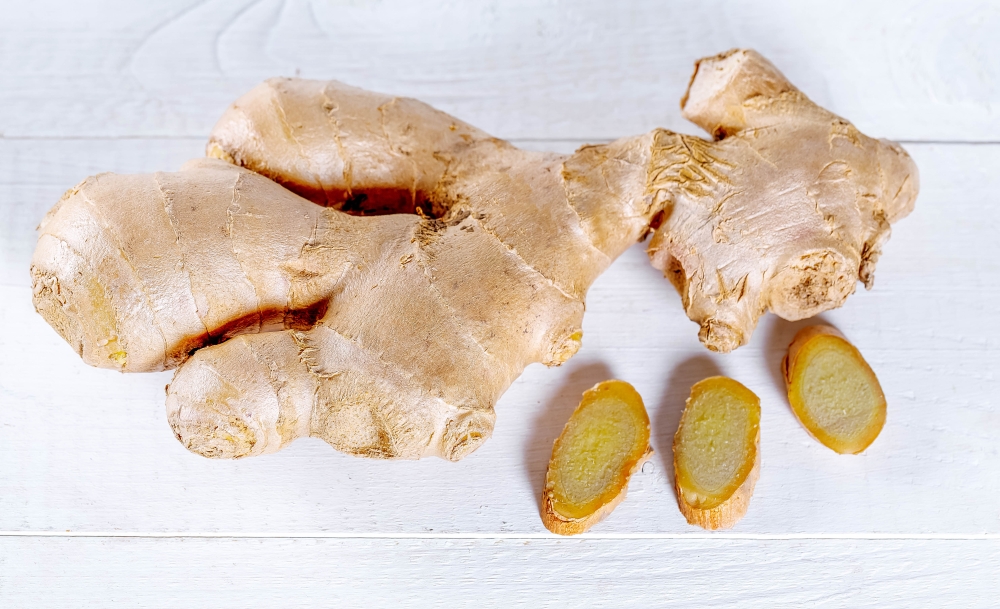 Ginger is one of the modern kitchen’s most interesting herbs. The spice has a punchy flavour mixed with a tangy citrus-like aroma and this combination lends a lot of character to many dishes.

The culinary properties of the herb are known since ancient times and it was one of the first spices exported from its home in South-East Asia to the West. Before that, ginger had already migrated via trade routes to India and Sri Lanka around 5,500 years ago. After that, the spice slowly made its way into the Mediterranean countries and ancient Greeks and Romans were cooking with ginger almost 2,000 years ago.

The official name of the ginger plant is Zingiber officinale and mostly people only use the rhizome (or root) for cooking. Ginger is part of the Zingiberaceae family of plants which also includes galangal, cardamom and turmeric.

Although it is common to hear about “wild ginger”, in reality there is no “wild” version of Zingiber officinale as ginger is a cultigen, or a plant created via selective breeding by humans over many thousands of years – as such, ginger as a plant would probably not be able to survive by itself outside of farms. Therefore, “wild ginger” usually refers to a variety of plants which can smell and/or taste like ginger.

The reasons why the human sensory nervous system senses heat from chemical compounds in food have been explored in my previous article, The flavour jigsaw: Hot chillies – Part 2. In summary, the TRPV1 receptor is particularly sensitive to certain compounds such as capsaicin, allyl isothiocyanate (the compound in wasabi and mustard) and raw ethanol.

Why ginger can taste “hot” is because the TRPV1 receptor is also sensitive to gingerol, a compound found in fresh ginger, though the reaction is not as fierce as with capsaicin. The heat effect of gingerol can also be mildly reduced by adding either sugar or salt to ginger.

It can taste even hotter

If gingerol is dehydrated, the compound loses a water molecule and turns into another compound called shogaol, which can taste around 2-3 times “hotter” than fresh ginger. This is because shogaol is a closer mimic of the structure of capsaicin, as shown in the diagram below. 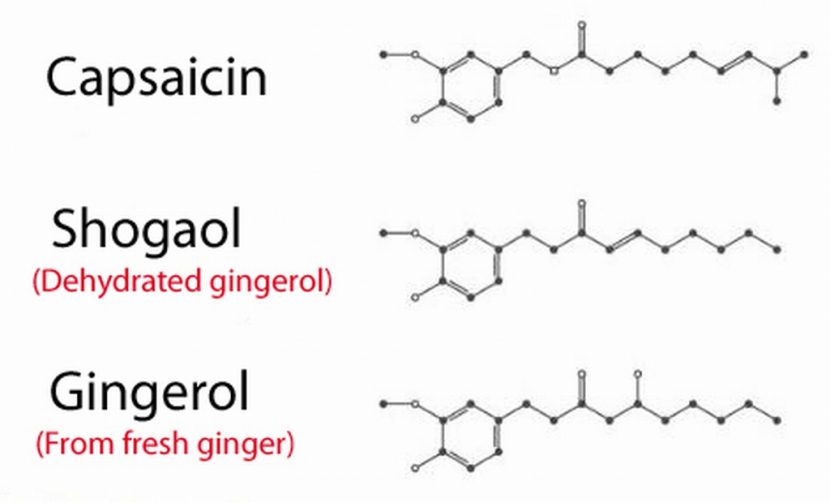 Ginger can also taste milder. Cooking it at high temperatures will break up the structure of gingerol, resulting in yet another compound called zingerone, which is much milder in taste than either shogaol or gingerol. This is because the chemical structure of zingerone is not suited for stimulating the TRPV1 receptor, as shown here:

Hottest stuff on the planet

As an aside, the compound that is perfectly suited for arousing the TRPV1 receptor is a chemical called resiniferatoxin (RFX), found in the North African cactus-like plant called Euphorbia resinifera or “resin spurge”. This compound is incredibly potent, with a Scoville heat rating of 16 BILLION Scoville Units. This is about 1,000 times hotter than the hottest chilli in the world, which is called the Carolina Reaper.

Tasting RFX is strictly not recommended as it will likely kill and destroy any affected TRPV1 receptors in the mouth. However, this effect of RFX may be very useful for treating tender body joints.

An injection of RFX into painful joints will destroy all the TRPV1 sensory cells in the region, thereby stopping the cells from signalling pain in the joints. RFX does this by binding/locking very tightly with TRPV1 receptors, therefore holding open the calcium ion channel in the TRPV1 cell, which eventually ends up killing the sensory cell. It should be noted that RFX is particularly good at targeting only TRPV1 sensory cells and will not harm other cells in the body.

Apart from gingerol, fresh ginger (especially the juice) also contains a powerful enzyme called zingibain. This enzyme is a protease, which means it will break down the long chains of amino acids in proteins into shorter peptide chains. Zingibain is quite effective at this. As an example, leaving some very finely chopped ginger on top of meat will render the surface of the meat mushy within an hour, even after cooking. Ginger has some health benefits, including antioxidant properties, so a cup of ginger tea once in a while might be good for you. Photo: Marco Verch/Flickr

As zingibain is such a powerful protease, marinades with a lot of ginger juice should not be left for too long on certain meats. However, the effect can be mitigated by adding some acidic component to the marinade, or mildly cooking the marinade first before applying on meat. Both acid and heat limit the effectiveness of zingibain. Time also reduces the effect of zingibain – even when stored at 5°C, zingibain will lose 50% of its effectiveness every two days.

With care, zingibain is probably one of the best meat tenderisers available in the world and the texture of meat treated with zingibain is generally acknowledged to be very desirable.

Knowing what we know about ginger and its chemical properties, we can use it to make a simple, interesting dessert. The steps are very simple, but precise.

1. Peel, then finely grate a large knob of ginger. Squeeze out the juice from the ginger using a strainer or a muslin cloth into a large bowl.
2. Mix in sugar to taste and warm up some skimmed or semi-skimmed milk until the milk temperature is 65°C. It may be a degree less but never more than 65°C.
3. Pour the warm milk in one straight motion on top of the ginger juice. Leave the bowl alone for an hour or two.
4. The zingibain in the bowl should have turned the sugared milk into a delicate dessert flavoured with the scent and taste of ginger.

If case you are wondering why it is important to warm the milk only to 65°C, it is simply because zingibain is most active at around 65°C and you need the enzyme to curdle the milk quickly.

For desserts, scatter some finely-chopped ginger over salad bowls. When making a fruit punch, some grated ginger in the drink should add some interest.

You would probably have heard claims about the health benefits of ginger. I am only aware that many of the compounds in ginger are antioxidants, some have anti-inflammatory effects and there are claims that paradol (another compound in ginger) may have some anti-carcinogenic attributes.
Another ginger compound called zerumbone is claimed to have both anti-tumour and anti-microbial properties.

There are in fact, various health claims about ginger but until a series of independent reviews are undertaken, it might help to err on the safe side at the next BBQ with another tray of ginger-based marinated meats. However, a better idea might be just some regular cups of ginger tea.