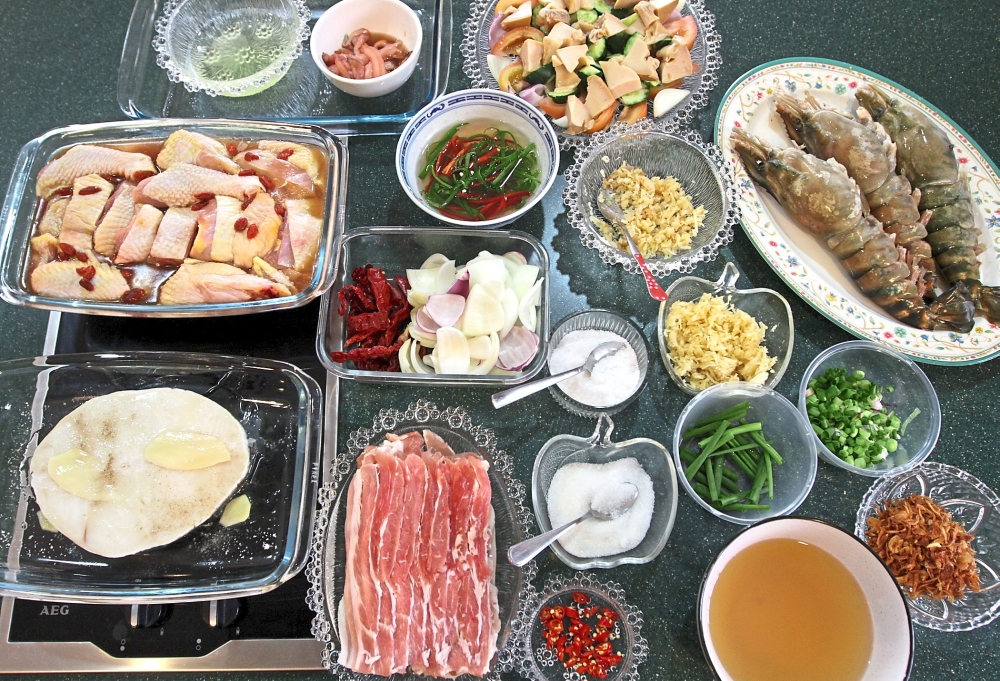 As you walk into Raymond Ng’s cavernous family home, you’ll quickly figure out that communal meals are very important to Ng and his family. Because the house has not one, not two, but three separate dining rooms dedicated to hosting the large family.

“My grandfather has 18 brothers and sisters, so when the entire extended family gets together for special occasions – well, we need the space,” says the personable Ng.

Thankfully, Ng has proven himself more than up to the challenge of cooking for his entire family. As a teenager, Ng’s passion for cooking was spurred by his experience as a foreign exchange student in Japan.

“I was transferred to a girls’ school in Japan where the extra-curricular classes involved sewing and cooking. At my first cooking class, they didn’t teach us about Japanese food, they taught us about Chinese food! So that is where I developed my passion for cooking,” he explains.

With time, Ng’s love of cooking has only become stronger. These days, he juggles many roles – working full-time at the family-run property development company his grandfather set up in 1959, helping run Tsukiji No 8 (the restaurant he co-founded with his friends) and cooking for his family. Interestingly, Ng, his wife and their two young children share their home with his 85-year-old grandmother and 86-year-old grandfather, while Ng’s parents live next door.

“I am the eldest grandchild, so I always knew I was going to look after my grandparents. My father is the eldest son, so he lives just next door. In case of an emergency, there are always people around,” he says.

This amazing testament to filial piety also extends to food. Every Monday, Ng devotes an evening to cooking a meal for his entire family as well as relatives who are able to make it for the weekly event.

“My grandfather and grandmother want us to maintain the Chinese tradition of eating together, so every Monday is like a reunion dinner at my house because my grandparents, my uncle’s family and my family all eat together. We normally have about 15 to 20 people for the meal!” says Ng.

“I will ask them what they want and they’ll say, ‘Today, I want this’ and I’ll cook that. If I’m not available, then my wife will help me cook for them,” says Ng, pointing at his gorgeous wife Denise Chong, who grins in response.

Many of the meals Ng whips up are the sort of traditional Chinese dishes favoured by his grandparents, like steamed chicken with Chinese wine, made up of tender chicken paired with a flavourful sauce.

“This is something my grandfather loves, because when he was younger, he could only eat chicken once a year, as he had so many siblings, so most of the time, the younger ones were given the better meals and the older ones ate what was left behind,” he says.

Another more traditional meal that Ng cooks for his grandparents is a nourishing, pepper-infused pork rib soup.

“This is also one of the my grandparents’ favourite dishes, because now that they are older, they get cold easily, so they like eating piping hot soups. And the white pepper and ginger in the soup is quite warming too,” Ng offers. 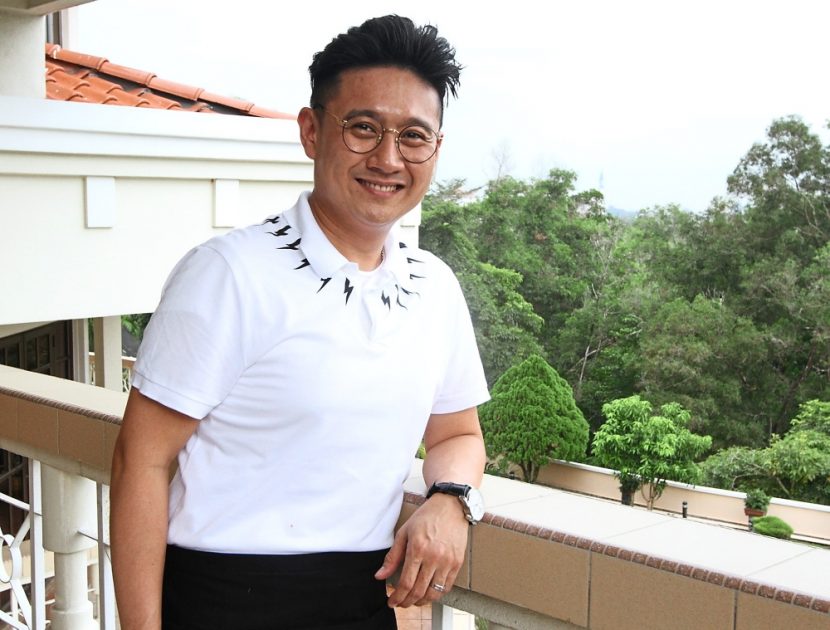 Ng developed a passion for cooking when he was an exchange student in Japan. Now that he is all grown up, he continues to cook, even hosting weekly family dinners for up to 20 people.

Some meals bear some resemblance to the food that Ng’s grandfather used to eat as a kid, but include some modern enhancements, in keeping with the family’s improved circumstances.

Like the dish of claypot pork belly and salted fish, for instance. Here, velvety strips of pork belly are juxtaposed against salted fish in an inspired marriage of flavours tied together by a rich, buoyant sauce.

“Previously, my family was not very well-off; my grandfather worked as a coolie at one point, so rice and salted fish were his main meals.

“When you are poor, that is the cheapest thing but now times have changed, so we’ve added pork belly so it is more flavourful, but it still reminds my grandparents’ of that old-fashioned taste,” he says.

Given Ng’s predilection for experimenting with food, inevitably he has come up with his own take on some classic Chinese dishes.

His meal of fat, fluffy, steamed river prawns, for example, also includes a sauce that he invented himself.

“If you just steam it normally, it’s tasteless, so I added some sauce to give it more flavour. Plus, my wife and kids love sauces, so I am always trying out new ones,” he says.

Another meal that has become a family staple is Ng’s abalone salad, a tangy, zesty salad filled with plump chunks of abalone. “It’s our family’s creation and is a fresh salad that can even be eaten as an appetiser,” he says.

Ng adds most of these meals can be whipped up quickly as he favours simple, uncomplicated meals.

“Once you have all the ingredients, it’s very easy. I can guarantee this because I like everything done fast,” he says laughing.

Ultimately, Ng says for him, the joy of cooking is closely intertwined with feeding the family that he so loves and is devoted to.

“What keeps us together and bonds us is the family gathering for food,” he says. 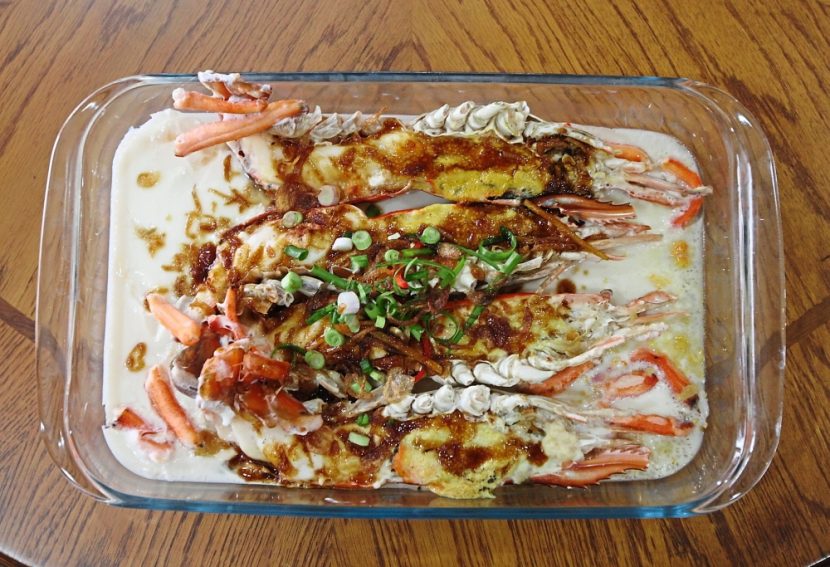 In a pan, add oil. Add garlic and ginger and stir-fry till it becomes golden brown. Add water, Shaoxing wine, sugar, vinegar, oyster sauce and light soya sauce and stir to combine. Add cornstarch and let simmer till the sauce thickens. Remove from the heat.

To prepare the prawns

Clean prawns and using a sharp pair of scissors, butterfly each prawn. Place prawns on a pie plate and season with a pinch of salt.

Pour egg white onto plate and steam prawns for 7 to 8 minutes. Remove from the steamer and pour sauce on top. Garnish with spring onions and serve hot. To prepare the chicken

Once done, steam chicken for 20 to 30 minutes until tender. Remove from the steamer and cut chicken into pieces. Garnish with spring onions.

In a sauce pan, heat up sesame oil and fry chopped garlic and green onion until aromatic. Add oyster sauce, light soya sauce and water. Mix well and bring to a boil. Remove from the heat, let cool a little and serve with steamed chicken. 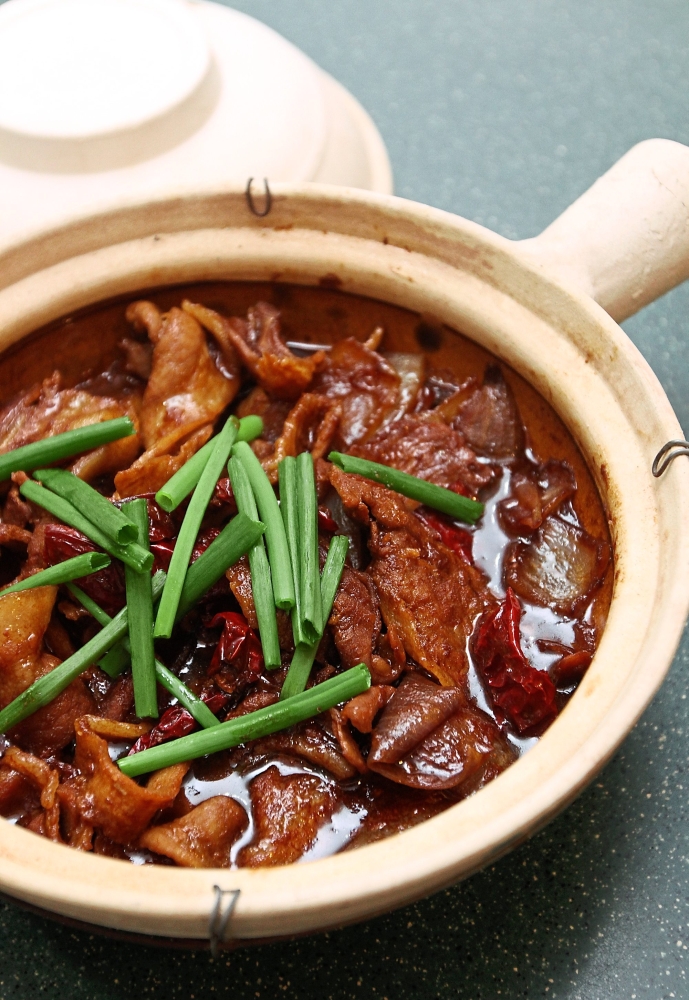 In a pan, heat oil on medium heat and fry salted fish until crispy and golden brown. Drain and set aside.

In a claypot, heat 2 tbsp of the oil used to fry salted fish and stir-fry garlic, onions, ginger and dried chillies until fragrant. Add marinated pork belly and sear the meat for 2 minutes. Add Shaoxing wine, water and dark soya sauce. Let simmer for 5 minutes. Stir in 3/4 of the salted fish and simmer for another minute.

Remove from the heat, garnish with spring onions and the remainder of the salted fish. Serve hot. In a pan, heat up oil and fry garlic till golden brown. Add in light soya sauce, oyster sauce, sugar, Shaoxing wine and water. Let cook for awhile, about 1 to 2 minutes. Remove from the heat.

Arrange all the salad ingredients, except lime juice in a salad bowl or large serving plate. Drizzle the lime juice and sauce on the salad and serve. Clean pork ribs, boil for 10 minutes, then leave to cool for 5 minutes.

In a pot, add pig’s stomach, ginger, white pepper and water. Bring to a boil. Lower heat and leave to simmer for 30 minutes.

Add pork ribs and gingko, crank heat to high and bring to a boil. Then lower heat and leave soup to simmer for 2 hours.

Discard scum floating on top of the soup and remove stomach from the soup. Chop into pieces and put stomach pieces back in the soup. Season with salt to taste, remove from the heat and serve hot.